When it got clear the attempts to hold the Arhem bridge was impossible the Commander of the 1st British Airborne, Urquhart ordered the Division to concentrate in the Oosterbeek area and form a defensive pocket that stretched down to the riverbank.This area is known as the Oosterbeek Perimeter.
Of the original ten thousand-strong 1st Airborne Division, a mere three thousand six hundred fighting men, excluding medical staff, defended the Oosterbeek Perimeter. Having been under continuous attack for three days, they were exhausted, hungry, and short of ammunition. The 1st Airborne Division had never been designed to fight its way through such heavy opposition, and their advances of the first few days had cost them dearly. However the men who had made it into the Perimeter were now able to fight the defensive battle for which they had been trained.

The Oosterbeek Perimeter taken from      The same area in googlemaps
http://www.pegasusarchive.org)

Hartenstein The Airborne HQ. Marked as no 1 on the googlemaps image

During the battle the Hartenstein hotel in Oosterbeek was the headquarters of the British divisional commander, Major-General R.E. Urquhart. The Airborne Museum is situated inthis very building 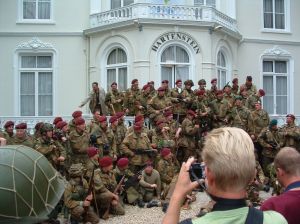 Hartenstein during the memorial back in 2004

Major-General R.E. Urquhart in front of the HQ and sams spot in 2012

Van Borsselenweg no 2 on googlemap image

This area was defended by  the D compagny of the Borders Regiment. Their HQ a big white farm still excist. They had 140 man and to 6 pounders.Tuesday morning 21 sept. 1944 a German Renault tank approach the farm from the small road on the pic. It got attacked by man with Brens and a Piat but was taken out by the 6 pounder. This position was hold until the retreat

The small road and field they defended.

As it was clear that they could’t holf the perimeter the decision was made to withdrawal. This plan was named Operation Berlin 25 th september . The route to the embarkation area was by no means an easy one. It was raining and dark, so the men had to proceed in file and follow the tape that lined each of the two paths leading to the River. Several parties inevitably lost their bearings and became detached on the way, usually resulting in their capture. The route used a narrow road named the Kerkepad (Churchpath) 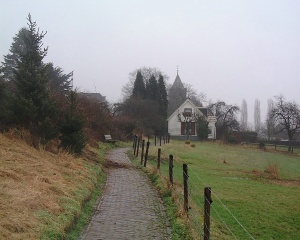 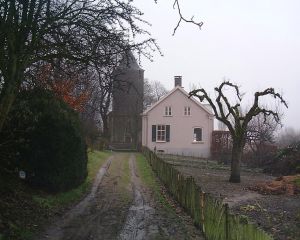 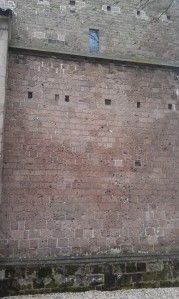 The church and view to the east,

Oosterbeek Church first featured in the fighting at Arnhem on 19th September 1944, when Major Richard Lonsdale, second in command of 11th Bn Parachute Regiment, gathered the survivors of the fighting around St Elisabeth Hospital. Himself wounded, he climbed in the pulpit, and delivered his now famous speech:

“You know as well as I do there are a lot of bloody Germans coming at us. Well, all we can do is to stay here and hang on in the hope that somebody catches us up. We must fight for our lives and stick together. We’ve fought the Germans before – in North Africa, Sicily, Italy. They weren’t good enough for us then, and they’re bloody well not good enough for us now. They’re up against the finest soldiers in the world. An hour from now you will take up defensive positions north of the road outside. Make certain you dig in well and that your weapons and ammo are in good order. We are getting short of ammo, so when you shoot you shoot to kill. Good luck to you all”

The defenders of this sector of the Oosterbeek Perimeter became known as ‘Lonsdale Force’
source: Battlefieldww2

During the Operation Market Garden, the British 1st Airborne Division parachuted to capture the Arnhem bridge but was outgunned by the German army. Captain Martin asked the Ter Horsts permission to set up a regimental aid post in their house at the Benedendorpsweg in Oosterbeek, to which they consented. This epicode is  captured in the movie A bridge to Far.

During the fighting of eight days, Ter Horst tended to about 300 wounded British paratroopers herself, while having five young children. After the battle 57 burried soldiers where recovered from the garden around the house

In the field behind the church was a battery from the Roayl artillery with 75mm PH
Shooting eastwards to support the man at Arnhem. With support from the Artillery across the river Rhine this sector was defended succesfully. 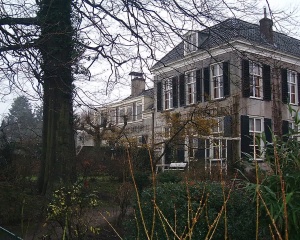 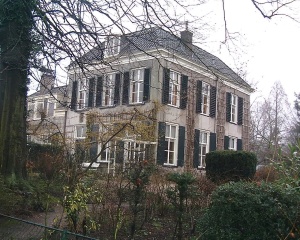